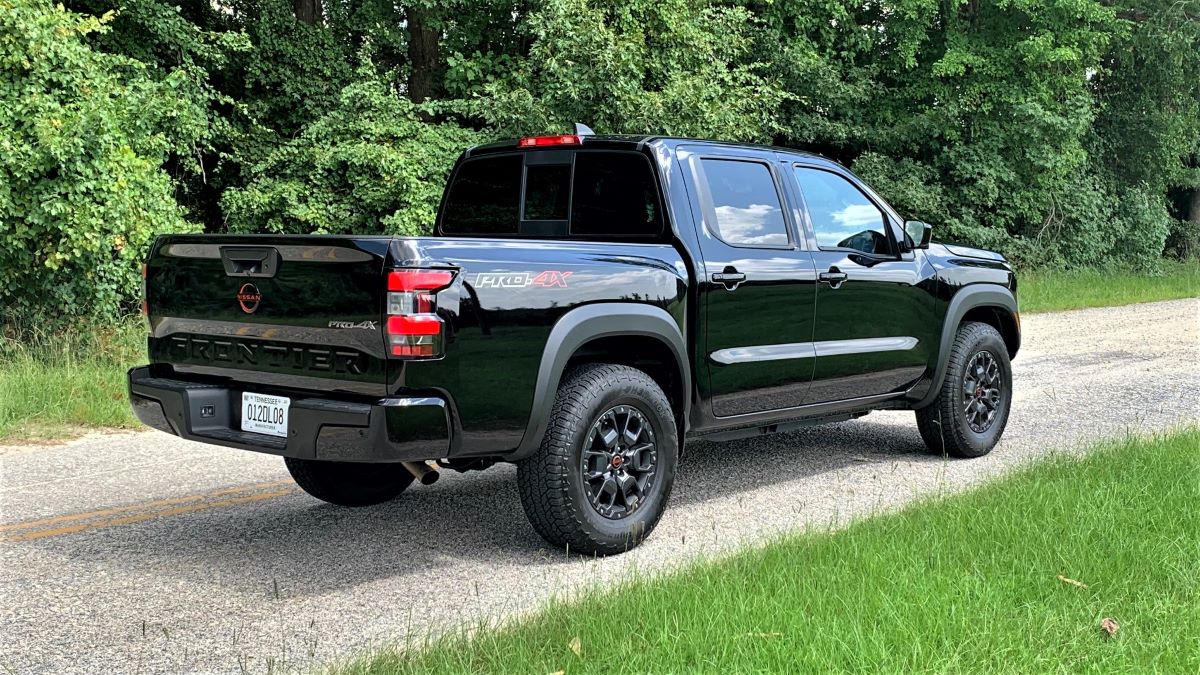 We drive the 2022 Nissan Frontier and laud it for its many improvements.

It has been a long time coming, but finally, it is here: a new Nissan Frontier pickup truck. This vehicle launches the Frontier’s third generation, although it shares the previous model’s frame. Bold styling, an advanced powertrain, and updated technologies set this model apart with considerable improvement made elsewhere.

The COVID-19 pandemic thew a monkey wrench into Nissan’s plans to release the third-generation Frontier in the 2021 model year. Instead, the second-generation model continued for a seventeenth year while Nissan made plans for an early 2022 release.

As before, the Nissan Frontier is available in extended two-door (King Cab) and four-door (Crew Cab) body styles. The King Cab has a six-foot bed, while the Crew Cab comes with either a five-or six-foot bed. All models have a naturally aspirated V6 engine and an automatic transmission. Sadly, the manual gearbox is no longer available. Customers have a choice of rear- or four-wheel drive. 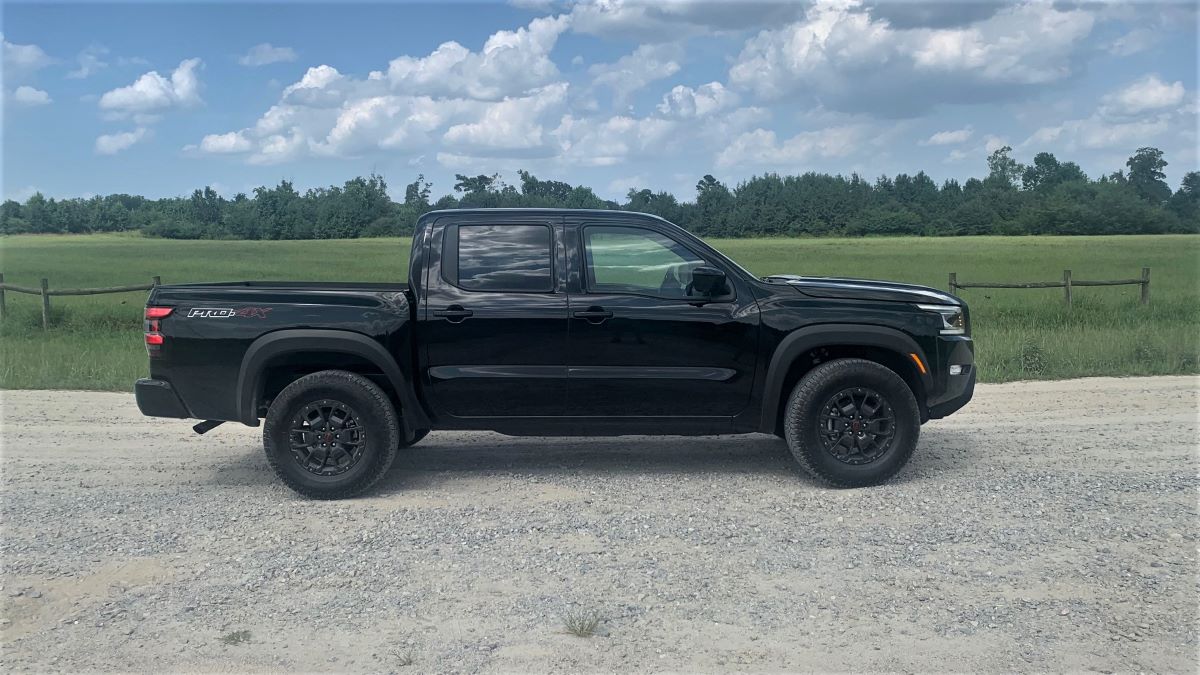 Highlights of the 2022 Nissan Frontier

Step by step and bit by bit we break down the 2022 Frontier. You wouldn’t know it, but Nissan kept the previous model’s ladder frame and strengthened it. We won’t quibble and call this model a carryover as new suspension bits offer further separation. The sheet metal is new and this truck is five inches longer from bumper to bumper.

The 2022 Frontier offers a more chiseled and modern expression than before. Indeed, it advances a huge leap in styling with its rugged appearance, highlighted by a broad grille with modern LED accent lighting. A high beltline, chunky wheel wells, and LED rear lighting are other features of note.

Power folding side mirrors with an available heating feature can be had. Various bumper claddings, bed-rail protectors, tie-down hooks, and a locking tailgate with a spoiler can be had. A multi-track system with four tie-down cleats is available.

If you are familiar with the Frontier, then you may realize just how out-of-date its cabin was. Fortunately, the operative word here is the “was” as the new model is greatly improved. That is not surprising, but it is a most welcome change.

The interior loses none of its truckish persona. Instead, it updates the look with a thoroughly modern design. The front-facing dashboard layout remains, but features ample layering, and distinct separation between the instrument panel, center console, and glovebox. A handy device holder sits above the console. At the base of the console is an available wireless charging pad. The rest of the truck features improved storage pockets and cup holders, and a fold-up rear seat with the Crew Cab. 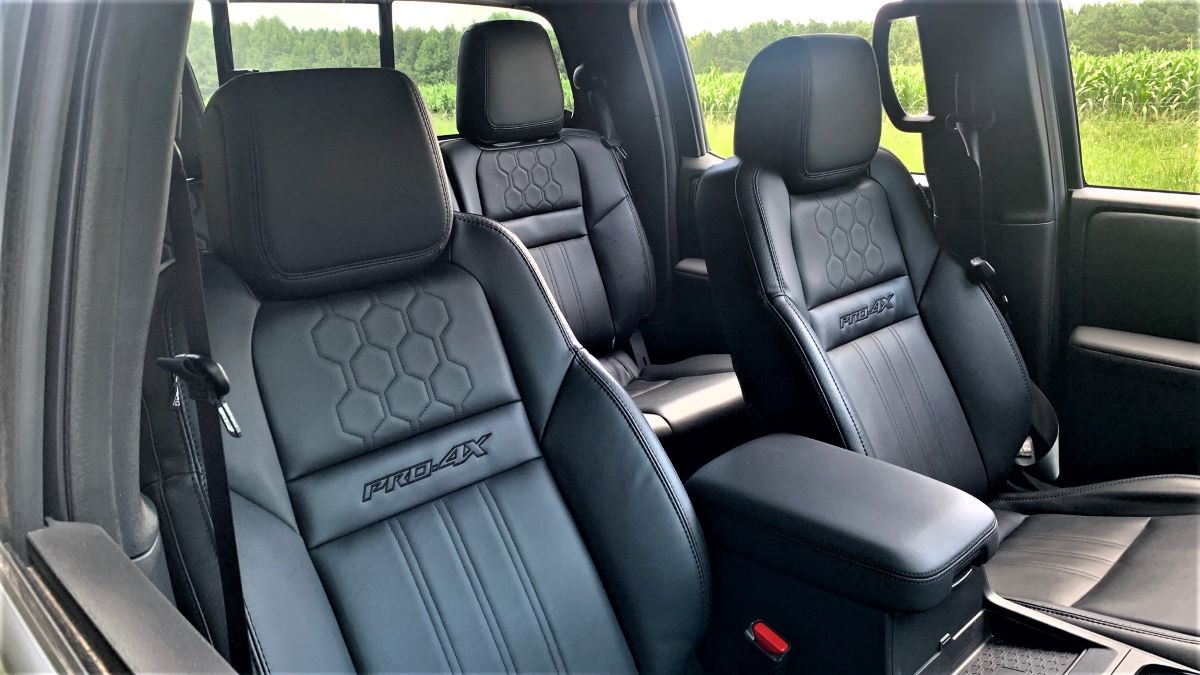 Choose the King Cab and a pair of jump seats mark the rear. That’s in contrast to the 60/40 split fold-up rear seat in the Crew Cab. Thus, the King Cab seats four and the Crew Cab seats five. In any case, both styles feature comfortable and supportive front bucket seats. We found ample head, shoulder, leg, and hip support at the ready.

The King Cab comes with either standard or premium cloth choices. With the Crew Cab, the upholstery improves as you advance through the trim walk. Namely, embroidered premium cloth with available imitation leather trim and real hides can be had.

Depending on the trim, a manual-controlled driver’s seat gives way to 8-way power-controlled and 2-way lumbar seats. In all trims, the front passenger seat is manually operated. Heated front seats and a heated steering wheel are available; sorry as there is no seat ventilation option.

Full power accessories are included. Among the upgrades are dual-zone climate control, an automatic tilt-and-slide sunroof with a manual sunshade, and upgraded door trim.

Nissan makes its 360 Safety Shield package available on every trim. Bundled under a Technology Package ($990), the upgrades include high beam assist, adaptive cruise control, and rear automatic braking. Also, blind-spot monitoring, rear cross-traffic alert, lane departure warning, and a rear sonar system are included. It is a worthwhile upgrade on the trims that charge extra for it. 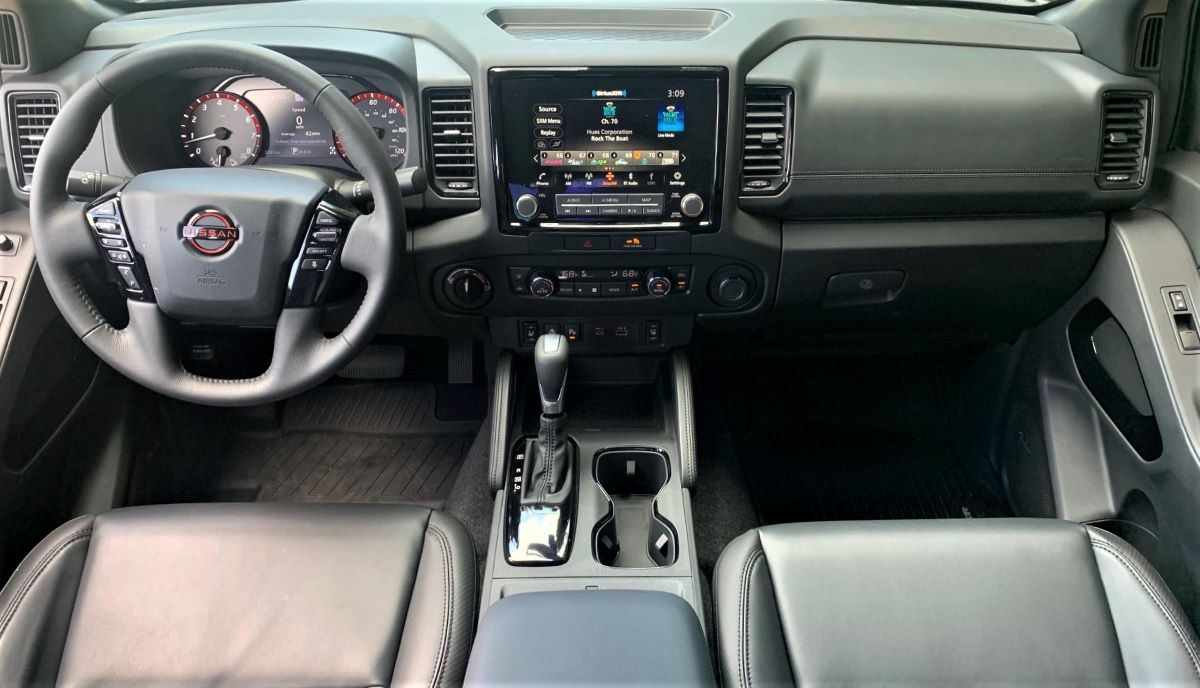 Nissan equips the 2022 Frontier comes with either a standard 8-inch touchscreen display or an available 9-inch display. Two USB ports are included, four are available. This truck features Siri Eyes Free, Apple CarPlay, and Android Auto, and a six-speaker audio system. The instrument panel has a 7-inch color display.

Among the upgrades are a 10-speaker Fender audio system, a wireless charging pad, and two 110-volt outlets: the first one is found in the cabin, the second one is in the bed.

What was supposed to be a one-year preview of the next-generation Frontier’s powertrain became two. In a highly unusual move, Nissan introduced the third-generation truck’s powertrain to close out the second-generation model. We had the opportunity to put that model through the paces and liked what we found.

Under the hood of every 2022 Frontier is a 3.8-liter naturally aspirated V6 engine. This one develops 310 horsepower and 281 pound-feet of torque. Unlike the previous model and not in keeping with what most of its competitors do, Nissan didn’t bother with a base four-cylinder engine. This move might cost Nissan some sales, but we think once people drive the V6, they’ll be won over. Further, Nissan pairs this engine with a clean-shifting 9-speed automatic transmission.

Among the advantages of the new powertrain combination is its raw power. The engine makes its presence known with a whoosh upon ignition and a rumble under full throttle. We didn’t check its 0-60 mph time, but this truck moves quickly and with authority. Speed concerns may not be one of the top attributes preferred by owners, but the added performance is certainly welcome when present.

On the highway, the Frontier picks up speed steadily and has copious amounts of passing power at the ready. The transmission is ideally suited for this truck as it doles out clean shifts. Ample low- and mid-range grunt make this engine a star in our book. 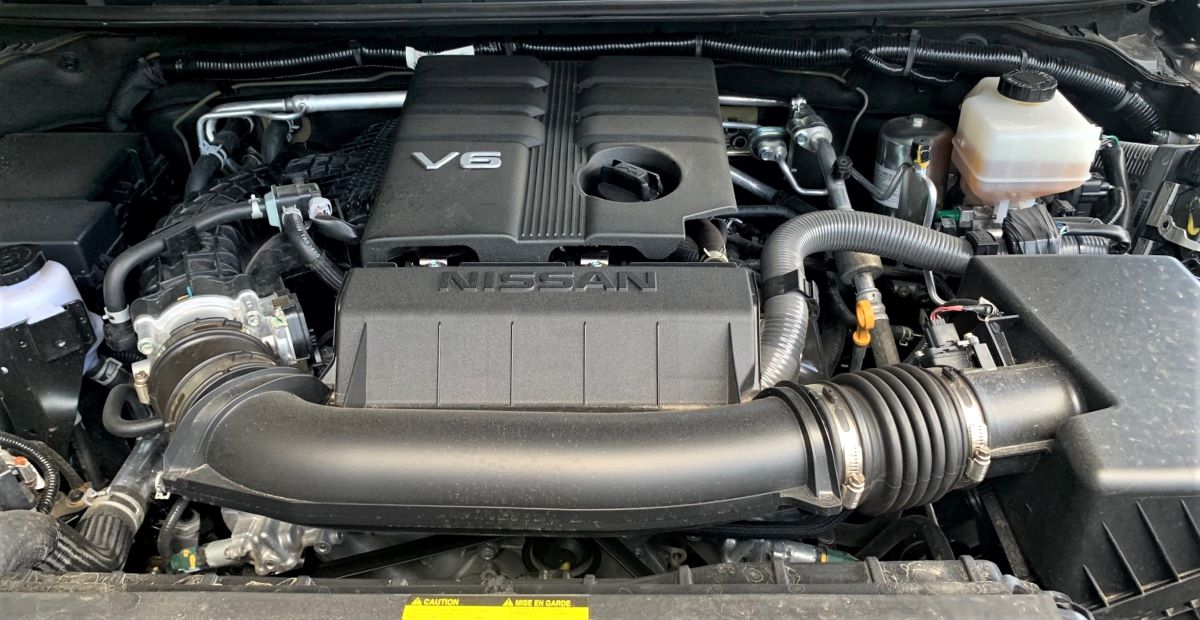 Strong brakes bring this truck to a stop with no fade detected. Direct steering and superior handling are other attributes of note. The latter remains especially competent even when equipped with the all-terrain tires on our Pro-4X trim.

Speaking of the Pro-4X model, this is the one that does everything to optimize the Frontier’s off-road prowess. Specifically, it comes with off-road tires, skid plates, and special shock absorbers. With 9.8 inches of ground clearance and an electronically locking rear differential are other features of note. We didn’t put it through the paces that top Jeep and Toyota models travel, but the Pro-4X is designed for the rigors of the toughest trails.

Other notable Frontier features include a 6,720-pound towing capacity when properly equipped. As for payload, it comes in at 1,610 pounds. Finally, to the surprise of no one, fuel efficiency is not this model’s strong suit. Indeed, with an EPA rating of 18 mpg in the city, 24 mpg on the highway, and 20 mpg combined, the rear-wheel-drive model is anything but efficient. Choose the four-wheel drive and those numbers fall to 17/22/19 mpg city/highway/combined.

Nissan also sells the full-size Titan and Titan XD, but the Frontier has always been this brand’s best-selling truck. Indeed, the Frontier is typically the second best-seller in the segment, following on the heels of the Toyota Tacoma.

Other models in this segment include the GM twins: Chevrolet Colorado and GMC Canyon. The Jeep Gladiator, Ford Ranger, and Honda Ridgeline are three others to consider. Notably, the Jeep has standard four-wheel drive, the Ford comes in rear- or four-wheel drive, while the Honda is all-wheel-drive-only. 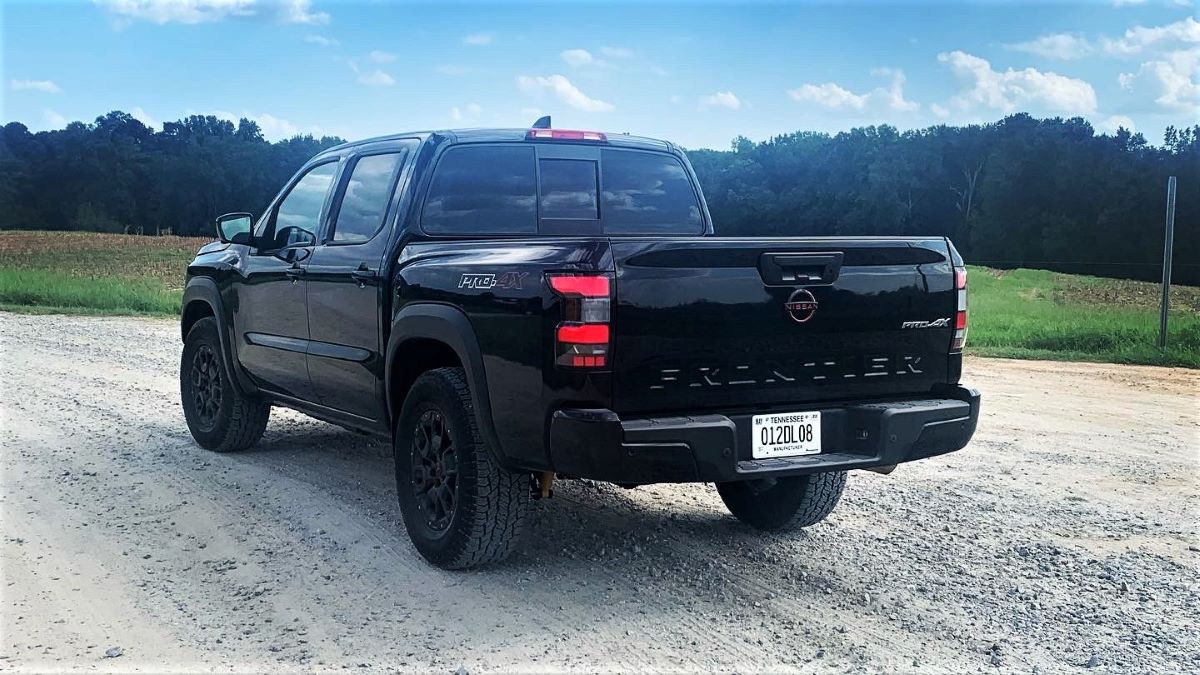 We recommend the Crew Cab over the King Cab, unless you will never need to carry more than two people in your truck. Further, start your search with the SV trim as that’s where various package upgrades become available. We think the sweet spot for this model is somewhere between $35,000 and $40,000, which depends on the packages and drivetrain selected. That’s within the range of other trucks in this segment too.

All in all, we are satisfied with what Nissan did to give us a fresh Frontier model. It is a much more competitive beast than before and comes to the market only slightly more expensive than the model it replaced. That said, it is easy to get carried away and build a truck that approaches $50,000. At that cost, you are well within Titan territory. 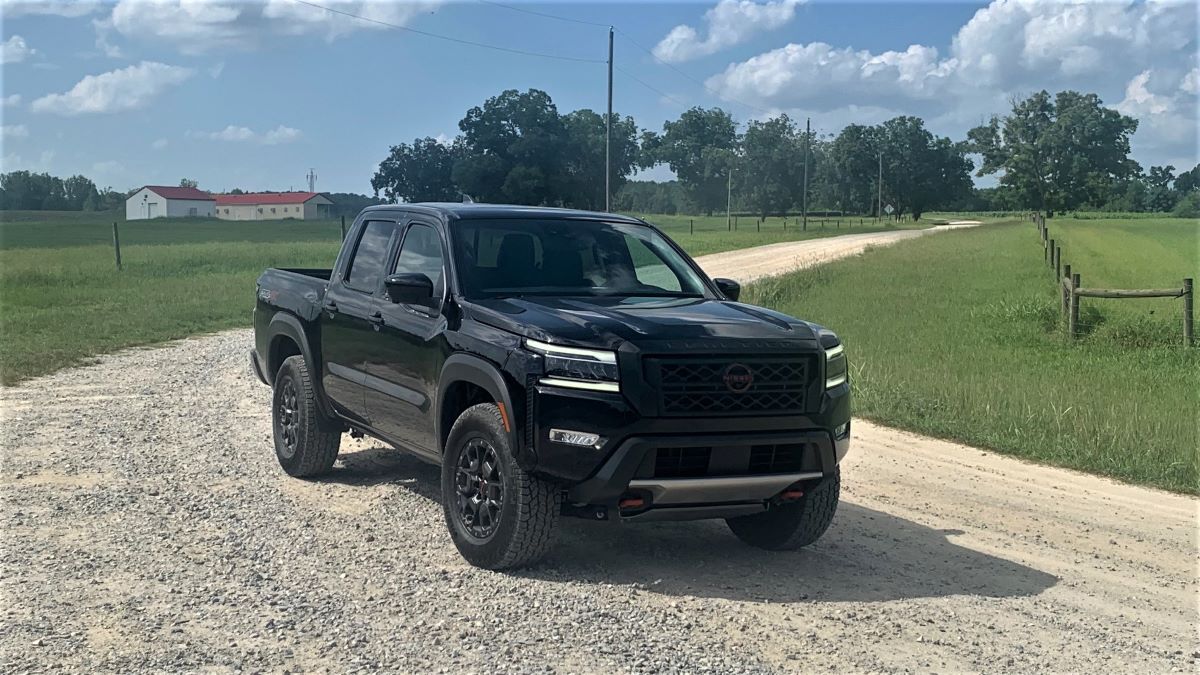 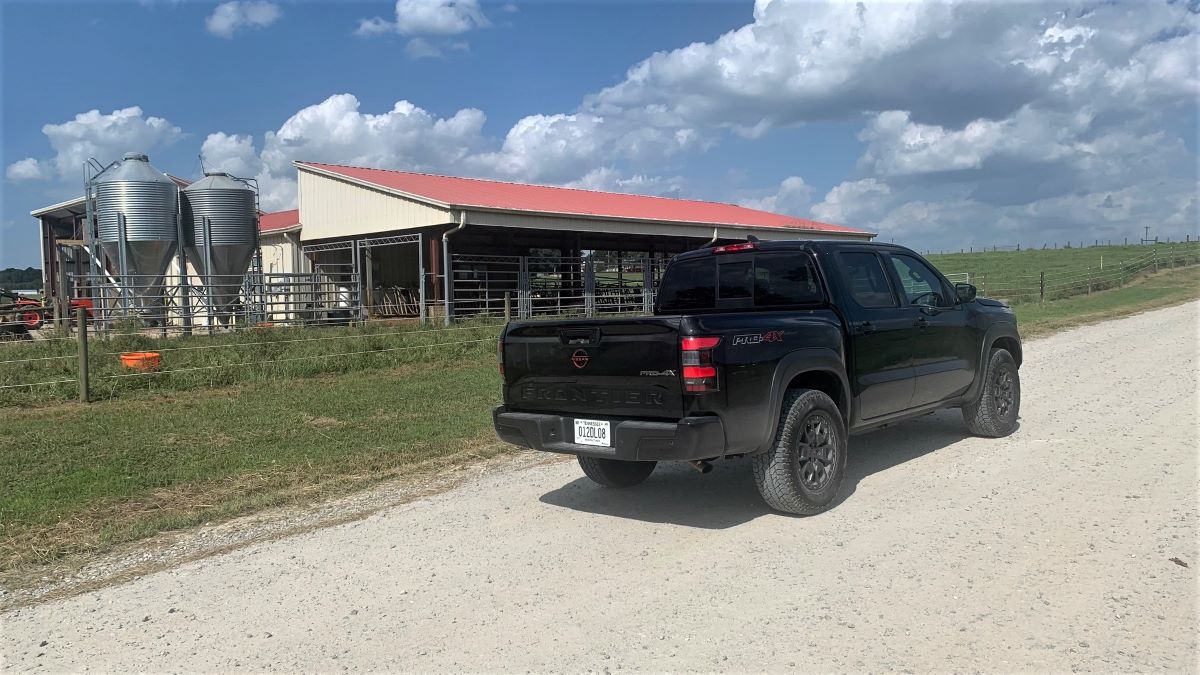 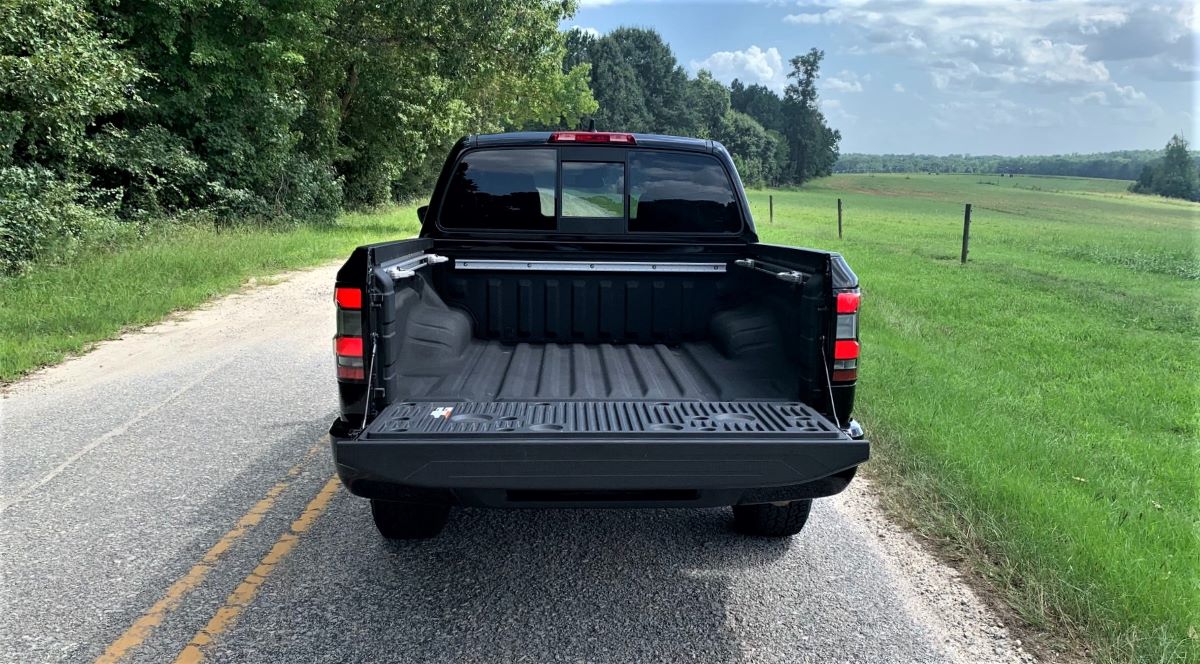 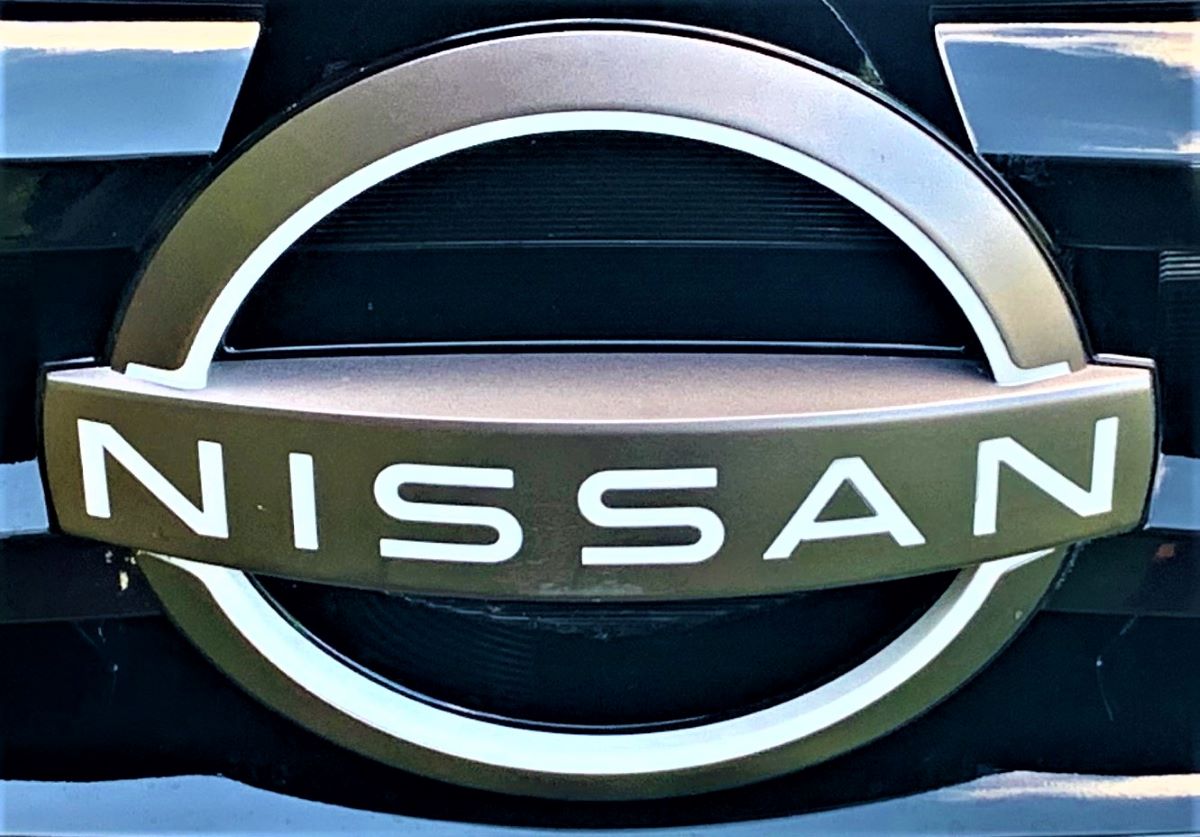 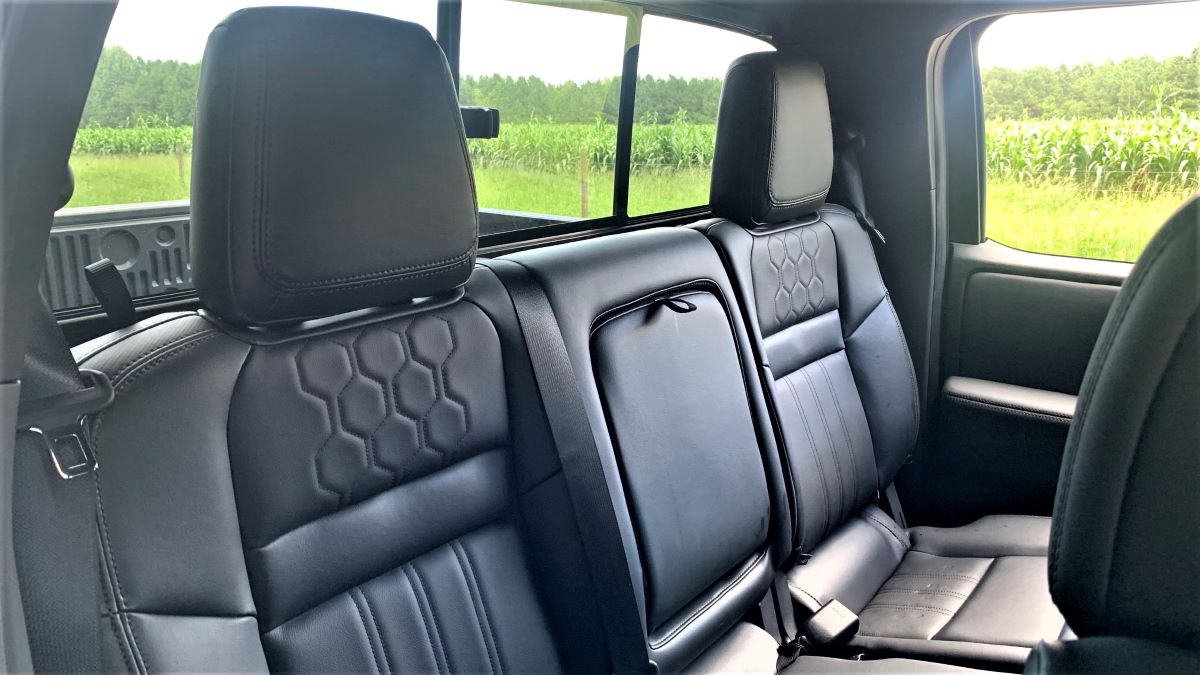 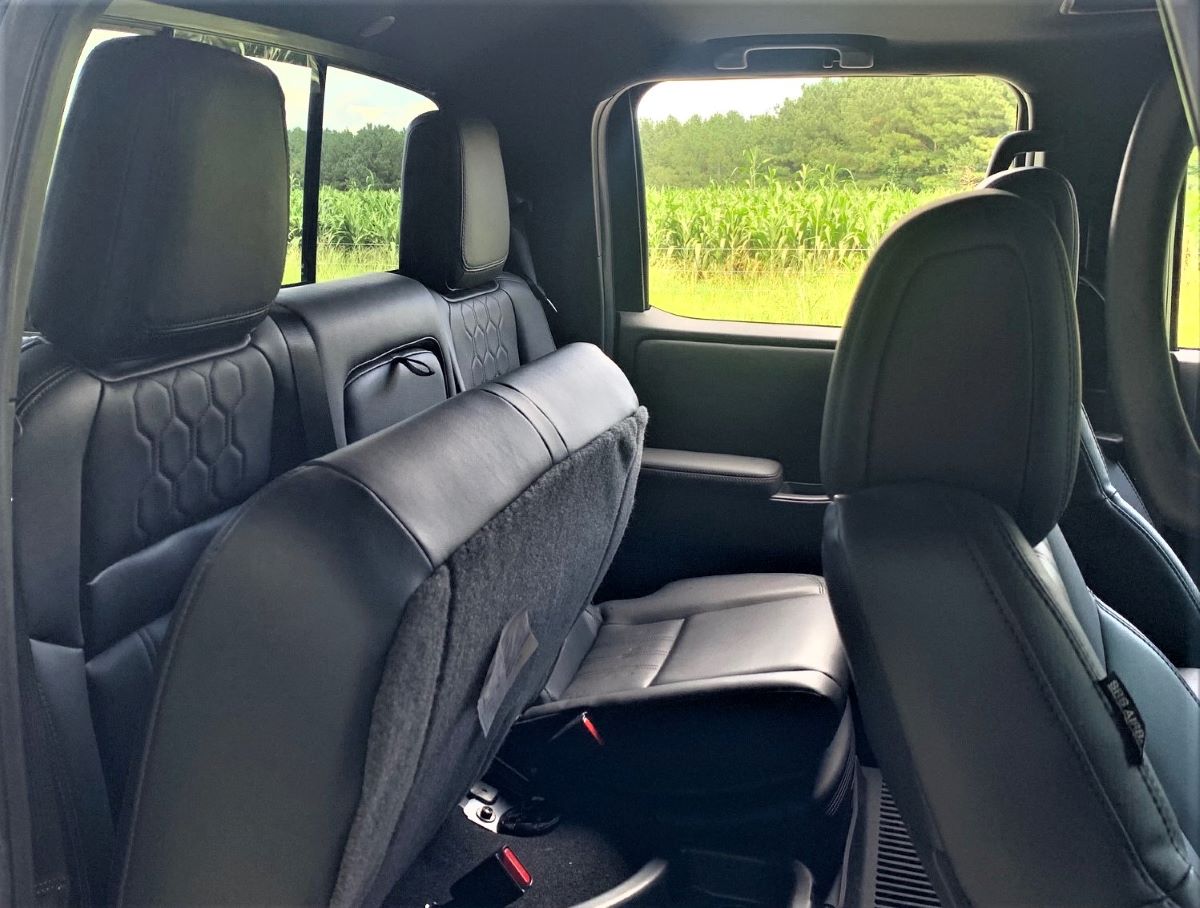