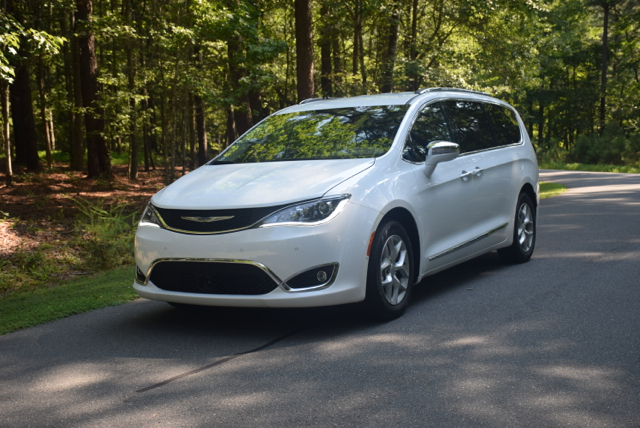 The Chrysler Town & Country is gone, replaced by the all-new Pacifica minivan.

The Chrysler minivan is back. Not that it ever left, but the previous models were overshadowed by the Toyota Sienna and Honda Odyssey. Not anymore. The all-new 2017 Chrysler Pacifica is as good as any model out there and with its stow ’n go seating, it provides a feature that its competitors simply do not match.

The 2017 Chrysler Pacifica successor to the Chrysler Town & Country a minivan produced from 1990 to 2016. The Town & Country name was previously used on various coupe, convertible, sedan, and wagon models dating to the early 1940s.

Chrysler resurrected the Pacifica name, last used for a crossover utility vehicle (or tall wagon) built from 2004 to 2008. The two models are unrelated.

The 2017 Pacifica is a front-wheel drive model with room for seven or eight, depending on your seating choice.

The 2017 Chrysler Pacifica is an all-new model. This one represents the first year of the first-generation model and was introduced in spring 2016 for the 2017 model year. 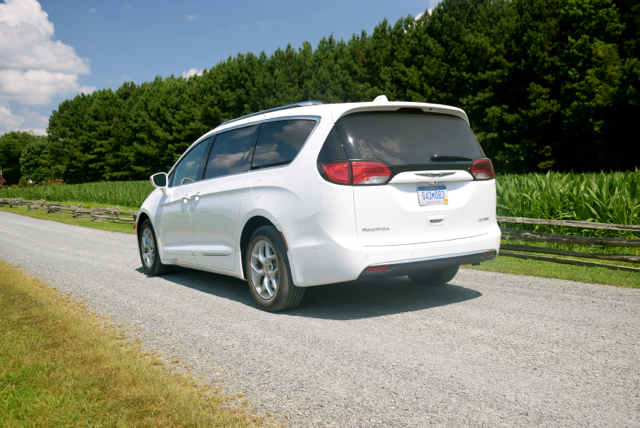 Chrysler provided a 2017 Pacifica Limited for the Auto Trends test drive. No Monroney (window sticker) was available, but two packages were included.

A UConnect Theater and Sound Group ($2,795) brings in a 115-volt auxiliary power outlet, a 220-amp alternator, a 760-watt amplifier — part of a 20-speaker Harman Kardon Audio Group — a Blu-Ray and DVD entertainment system, a pair of seat-back-mounted high-definition video touch screens, and a pair of wireless headphones. 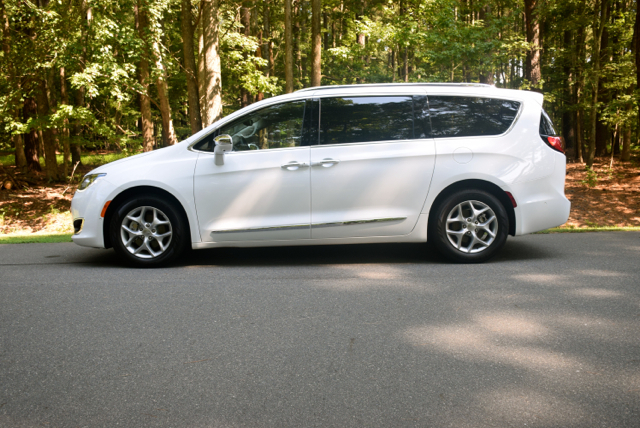 One glance at Pacifica’s front fascia and you’ll find a familiar expression, one advanced by the current-generation Chrysler 200 midsize sedan. This model has a narrow upper grille and a more pronounced lower grille with headlamps and available fog lamps hemming in both respectively.

Much of the rest of the van offers a familiar layout, including its dual sliding doors. However, there are also some key differences in this clean sheet design, including a sloping roof line, distinct character lines, and lower body trim. From the rear, oversized combination lamps, a built-in spoiler, and reflectors are present.

Standard 17-inch aluminum wheels can be upgraded to 18-inch aluminum polished wheels. And for the first time ever, this minivan now offers available 20-inch wheels, part of a package bringing in eight-passenger seating in the Limited edition only. As the photos show, my test model was so equipped.

All models also come with folding, heated side mirrors. Further, a roof rack and rails are also available or are standard beyond the base trim level. 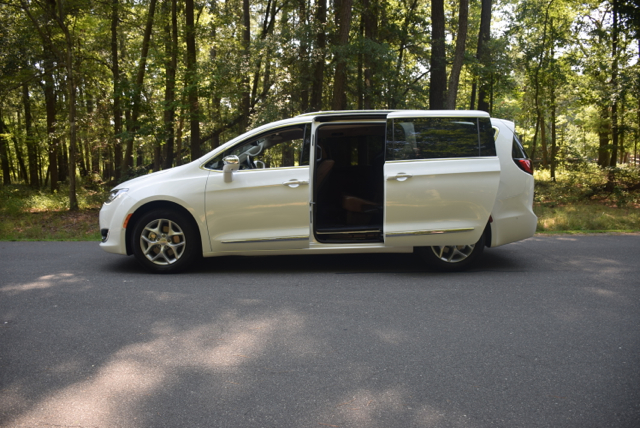 Chrysler lays out Pacifica’s seating configuration in 2-3-2 or 2-3-3 fashion. The first choice offers captain’s chairs in the middle row. The second choice brings in a split-folding bench seat. Carefully weigh the importance of acquiring an extra seating spot here at the expense of losing the very comfortable and versatile captain’s chairs.

Nevertheless, the test model came with the 40-20-40 middle bench seat and it isn’t a bad arrangement. Chrysler pushes the center console far enough forward to provide ample leg room for the middle seated person, even with the rear facing pullout drawer with two cup holders.

From front to back and from side to side, this “mini” van seems quite large. The greenhouse gives this model a bright and airy impression. The Limited edition brings in window screens for the sliding door, providing a measure of privacy. This model has leather-appointed seating and leather door inlays, with soft-touch materials and brightwork trim across the dashboard, on the door frames, and surrounding the center console.

The instrument panel features a pair of analog displays —speedometer and tachometer, along with a multi-color digital driver’s center. The face of the steering wheel offers switches for controlling the center unit. 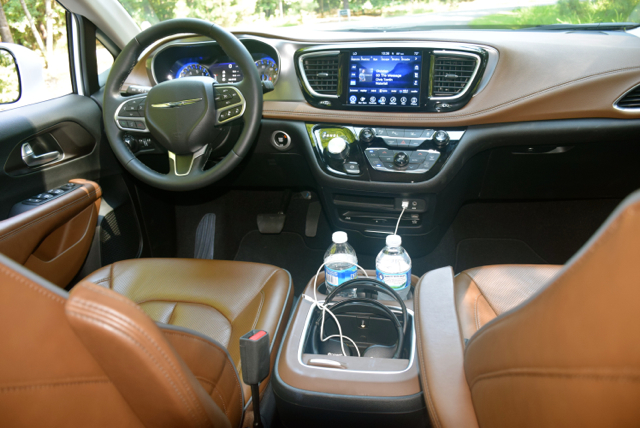 Head to the center stack and you’ll find an 8-inch color display for the UConnect telematics system. I’ve praised this system in the past and continue to do so — it is intuitive, easy to operate, and the directions are spot on. Beneath that is the transmission shifter and an electronic parking brake along with various driver controls, and the climate control system. Head further down and you’ll find an open storage slot for holding your smartphone, a USB port, and an audio port. Moreover, a CD player and a large pullout storage drawer large enough to hold your iPad are also present.

At the base of the stack is an open storage area along with a 12-volt outlet and a USB port. The storage area is large enough to hold a small purse. Another open storage compartment is forward the center storage console, along with two cup holders, and a roll top storage area. This console does not do double duty as an armrest — Chrysler provides a pair of fold-down armrests for both front seats.

When the third-row seats are in place, you’ll find a deep storage compartment behind same. You’ll also come across a temporary spare tire in a side wall compartment, a 12-volt outlet, and tie downs.

This model’s stow ’n go seating system may be the difference maker for many consumers. It is an easy way to hide the third- or second-row seats, even both. In doing so, you get a ridiculous amount of storage room. Importantly, the folding seats are thicker and more supportive than ever, despite needing to hide away underneath the floor.

When not in use, the same storage compartments can be utilized to hold other items — that’s a double win for consumers. 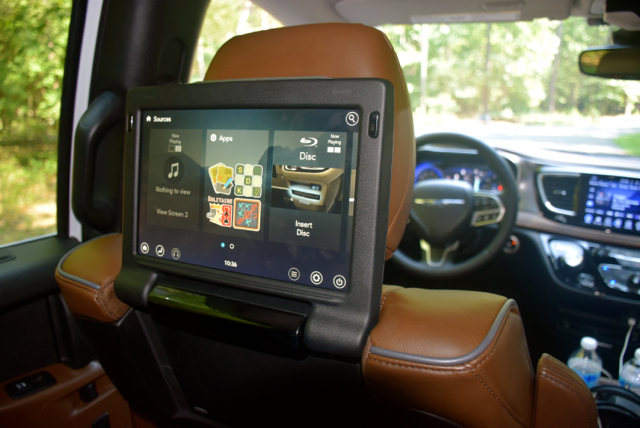 The 2017 Chrysler offers one powerplant combination. A 3.6-liter, V-6 engine is paired with a 9-speed automatic transmission.

The V-6 engine is aptly suited for this vehicle. It is the same engine FCA uses to power such models as the Ram 1500, Jeep Grand Cherokee, and the Dodge Charger. No boosting is necessary — just step on the gas pedal and the engine roars to life. I’m sure some of the rumbling emanating from the exhaust system is artificial, but at least the performance is there to back it up as the minivan climbs to highway speed quickly and without hesitation.

How would the Pacifica perform with a full payload and pushing the minivan to its 3,600-pound towing capacity? I never found out as four was the maximum number of people carried at any time and I had nothing to tow. But at least the capacity is there and it gives customers something to consider that isn’t a crossover (Dodge Durango) or a pickup truck (Ram 1500).

The 2017 Pacifica rides quietly and road noise is minimal. On the noise, vibration, and harshness (NVH) scale, this vehicle gets high marks thanks in part to its standard active noise cancellation technology. It also scores well in the handling, steering, and braking dominions. 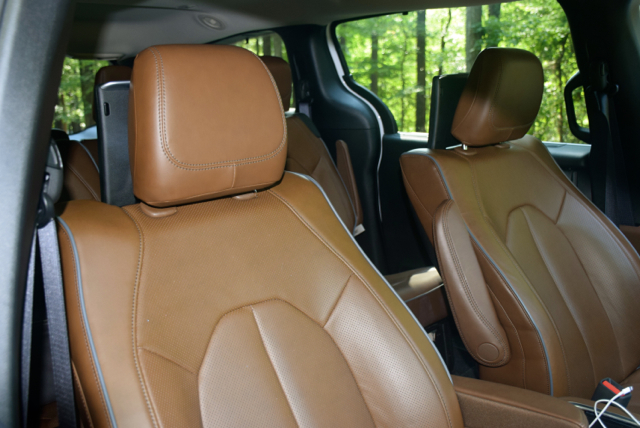 The 2017 Pacifica provides a feature never offered in the Chrysler Town & Country or the Dodge Grand Caravan, but offered by Honda in the Odyssey: an in-cabin vacuum. For its unit, FCA turned to Emerson, maker of the RIDGID vacuum to design one for the Pacifica.

Unfortunately, the vacuum was not included in the test model, but for vehicles outfitted with one, it provides ease of access to the second row area where most spills and messes are found. The hose can reach the entire interior of the Pacifica, then retract into its storage space. The manufacturer claims best-in-class suction and that’s good news for families.

Other technologies are mentioned elsewhere and include the Chrysler UConnect system. UConnect also offers Apple CarPlay and Siri Eyes Free integration. If you don’t have an iPhone, now worries: the system is Android Auto compatible too.

Chrysler says the 2017 Pacifica has more than 100 safety and security features. I wasn’t about to count them all, but I can tell you that this minivan offers several features that portend autonomous driving. See the “trim levels and price” section above for an available safety package.

All models are equipped with a suite of airbags, including driver and front passenger knee airbags. Brake assist, traction and stability control, electronic rollover mitigation, hill start assist, and trailer sway control are among the standard features.

The 2017 Pacifica has not been crash tested by the Insurance Institute for Highway Safety (IIHS) as of publication. Chrysler expects the toughened minivan will receive a top score in the institute’s small front overlap test where the previous model received a poor grade. Credit must be given to the broader use of high-strength steel and a stronger floor. In the process, the Pacifica saved upwards of 250 pounds compared to the Town & Country. 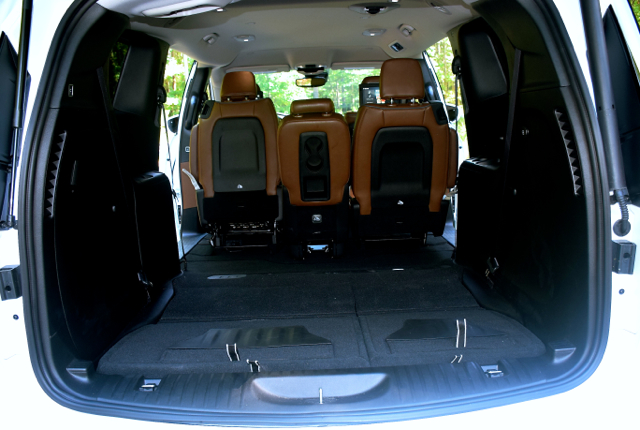 Auto Trends typically recommends buyers consider the middle group of trims when looking at any new vehicle. Manufacturers expect that too, so you’ll probably find dealer lots filled with all three “touring” editions.

From there, carefully examine what’s important to you. For many minivan owners, the vehicle is like a home away from home, useful for carting your students to school, games, and to other activities. Still, to get a loaded model you’re talking about a $40,000 price tag, but that’s not uncommon in this segment.

The 2017 Pacifica is an improvement over the previous Chrysler Town & Country in every way. Honda and Toyota offer stiff competition and the Kia Sedona and Nissan Quest might also be considered.

It should be noted that Fiat Chrysler will continue to make the Dodge Grand Caravan for a few more years, an older model and the longtime twin to the now-retired Town & Country. Minivans offer more versatility than comparable crossovers and for this reason they’re worth considering — but why not consider the new model on the block? 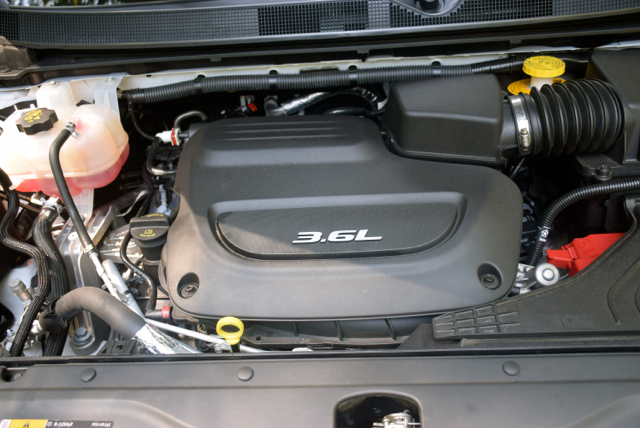